It’s a miracle – I can finally do press-ups!

I’ve always considered myself to be quite a fit person but, amazingly, I’ve always found it really hard to do press ups. Not surprising really because you’re trying to lift what is almost your own body weight with your, relatively weak, triceps – the ones on the back of the arm – and your pectorals across your chest.

Because they’re so difficult, it’s an exercise that most people avoid with the result that not many people can do them. This is a shame because they are a fantastic way to firm up important parts of the body – and a great way of ‘perking’ up your chest, whether you’re a man or woman. Done properly (with a dead straight back) they’re also really effective at strengthening the core muscles as well.

So I’m determined to conquer the press-up and have an objective of being able to do at least 30 in the foreseeable future (a wonderfully nebulous target date).

The key thing about setting yourself any exercise target – particularly hard ones – is to set an initial objective that’s impossible to fail. That’s because as soon as you fail in an attempt to do something, you’ll probably not try again. 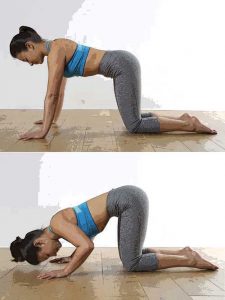 So I started last week with an objective of doing just 5 kneeling press ups (see pic). Even that proved hard, so I reduced it to 3.

That I could do, so I managed to achieve that objective for 3 days in a row – doing 3 sets of 3 throughout the day.

So far so good and I increased it by 1 extra per day, still 3 times a day.

What’s amazing about your body is that it will adapt to new exercises really quickly – as long as you do it in small increments. So if you said to yourself, like I did, “I’m going to do 20 press ups” and tried it in one go – you’d most likely fail.

BUT, attempt the challenge bit by bit and your body will do it. And, just as important, you’ll never fail in your daily objective and, as you achieve it each time, your mind will start to understand that press ups are possible.

This weekend, I’m going to move my knees back to make the press ups harder and I might, just might, try a full press up. Then 2, then 3 and so on.

You can use this approach on any exercise, whether it be a static one or moving one like jogging or skipping. 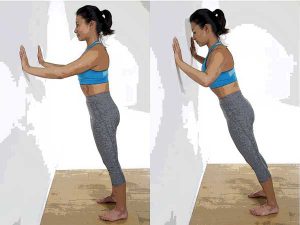 If you are going to try this with press ups and you find even a kneeling one hard, then try leaning against a wall to begin with. Move your feet further away from the wall to make it harder – and then move onto the floor.

Above all, make any objective impossible to fail!

Looking for something specific?

We always like to hear from our readers and users! If you have any questions or comments, then please get in touch!

We use cookies to ensure that we give you the best experience on our website. If you continue to use this site we will assume that you are happy with it.OkPrivacy policy